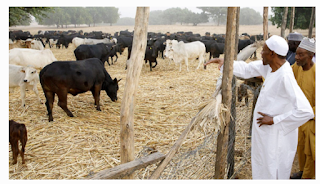 Mr Falana also stated that the federal did not have control over lands outside the Federal capital territory as the ban on open grazing in the South and Benue did not sit well with Mr Buhari and most northern governors.

On Wednesday, Mr Falana told ARISE TV that the Land Use Act of 1979 outlawed the grazing reserve law established by the then Premier of the northern region Ahmadu Bello.

He explained, “The applicable law in Nigeria today is the Land Use Act which has been imposed and entrenched in the Constitution since 1979. By virtue of section 1 of that act, the entire land in every state is vested in the governor on behalf of the people.

“The president of Nigeria does not have control over any land outside the FCT. So, this is the position of the law.”

He, however, had strong words for Mr Malami, whom he accused of misleading Mr Buhari on the position of the law regarding grazing routes and open grazing in the country.

“The attorney general cannot go around without the consent of a state governor to acquire any land in any part of the country having regards to the fact that the Land Use Act as a federal enactment has covered the feud,” Mr Falana pointed out.

“The question of the grazing reserve law is no longer applicable. The law is spent as far as the land administration of today is concerned,” he added.

“There was no time in the history of Nigeria that grazing routes existed in all the regions. In the First Republic, there was no grazing route in the entire southern part of the country,” Mr Falana asserted.

“So if someone has informed the president that a gazette existed in the First Republic, the president has right to say ‘go and look for it.’ I’m saying whoever has embarrassed the president in this regard has to be questioned,” he added.

Mr Malami had in May described southern governors’ ban on open grazing as illegal. He argued that the governors’ prohibition of open grazing infringed on the freedom of Nigerians enshrined in the constitution.