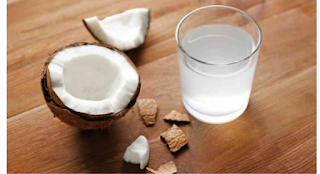 Ms Suleiman, in an interview with NAN on Wednesday, said that “coconut water contains higher amounts of potassium than other fruits and potassium normalises the sodium level in the body, thereby reducing blood pressure.

“The high potassium in coconut water helps to balance excess sodium in the body, and this

The nutritionist, who explained that coconut water was a natural sports drink, with high calcium and magnesium content, added that it

was good for people who engage in vigorous exercises.

She explained that “during exercise, the muscles hit on the bones and in that process, there is thin wearing away of the muscles.

She also said that cytokines are present in coconut water, explaining that “cytokines are plant hormones with anti-aging properties and can potentially fight cancer cells.”

Ms Suleiman noted that various products such as coconut milk and coconut candy could be derived from coconut and that no part of the fruit was a waste.

“Cytokines are not only present in coconut water, but also in coconut oil.

“Applying coconut oil gradually wears away wrinkles on the face. It can also be applied on fresh wounds to prevent the formation of scars.

“There are just so many products to get from the coconut and the interesting thing is, every part of the fruit is important.”

She also made it clear that eating coconut or any of its products has no side effects on the health of individuals as long as it was consumed in moderation.

She said it could be eaten two times a week.

She, however, said that coconut was not recommended for people with renal failure as it would worsen their situation.

“Like I said earlier, the potassium in coconut pulls out excess sodium from the body. This sodium is being sent to the kidney for possible excretion.

“For someone with renal failure, excess sodium in the kidney will worsen the situation and can lead to complete failure of the kidney.

“Hence, we do not recommend coconut to such people,” Ms Suleiman added.