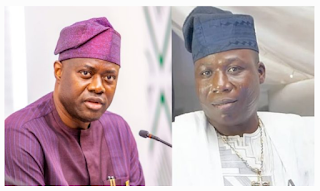 Governor Seyi Makinde of Oyo says his government will continue collaborating with President Muhammadu Buhari’s regime to tackle insecurity in the state.

Mr Makinde gave the assurance on Monday while hosting the Peoples Democratic Party (PDP) federal lawmakers from the state, who paid him a courtesy visit in Ibadan.

In a statement by his Chief Press Secretary, Taiwo Adisa, the governor said his administration was making progress toward addressing the spate of insecurity ravaging the state.

He said no federal security agency operating in the state, which his government had not assisted to be more effective.

The governor urged the lawmakers to cooperate with the federal establishments to address the insecurity and move the country forward.

“We may be in opposition to the party in power at the federal level, but we are not out to politicise the issue of insecurity,” Mr Makinde said.

He also urged the lawmakers not to be far away from their constituencies and complement his government’s efforts to providing dividends of democracy to their constituents.

The lawmakers passed a vote of confidence in Mr Makinde for what they described as “unprecedented achievements of the Makinde’s administration in the last two years.”

Mr Balogun declared that the governor had been able to bridge the trust deficit between the people and the government.