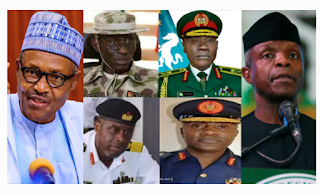 Mr Buhari presided over the Tuesday meeting of the National Security Council at the State House, Abuja.

Also in the meeting are the Secretary to the Government of the Federation, Boss Mustapha, and the Chief of Staff to the President, Ibrahim Gambari.

The meeting would review the current security developments occasioned by the activities of ISWAP, Boko Haram, bandits, and IPOB.