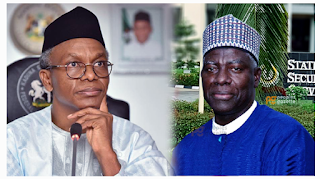 Nigeria’s secret police, the State Security Service (SSS), says Governor Nasir El-Rufai is working on establishing a drone centre in Kaduna to spy and gather intelligence on bandits and other criminals terrorising the state.

SSS Director in Kaduna, Idris Ahmed-Koya, disclosed this during the 2021 second quarter meeting of directors of the SSS in North-West states on Thursday in Kaduna.

‘’The current efforts by the state government to establish a drone centre for intelligence gathering and support of other security operations is highly commendable,’ said Mr Ahmed-Koya.

The SSS director noted that the centre would be a game-changer in tackling insecurity in Kaduna, the North-West and North-Central zones when it becomes operational.

‘’Similarly, all our successful operations are made possible and easy through the requisite working tools provided by the state government. The IMSI Grabber is one of such tools,’’ he added.

Mr Ahmed-Koya, however, appealed to the governor to provide the command with operational vehicles to carry out its operations.

Mr El-Rufai, during the meeting, said tackling insecurity required the cooperation of all states and for security managers and intelligence agencies to share information.

He explained that “any plan that seeks to address the problem in only one state will at best yield a temporary respite as the criminals will retreat to safe havens.”

Speaking further, he told the SSS directors, ‘’The security agencies need to strengthen intelligence gathering, to establish not just the identities, plans and locations of these criminals, but to actively disrupt their capacity to organise and mount attacks on our citizens.

‘’But it is also very important to ensure that prompt and coordinated action becomes the default response of the armed forces and the police to the profusion of actionable intelligence that is already available.’’

Mr El-Rufai added that the governors of the North-West and Niger appreciated the salient fact of inter-state cooperation as far back as 2015.

‘’They came together to fund simultaneous operations by the federal military and security agencies across the largely ungoverned Kamuku-Kuyambana forest swathes that straddle about seven of our states up to Dajin Rugu.

‘’These operations disrupted the cattle rustling gangs but were unfortunately not sustained as a continuous exercise to dominate these spaces and assert within them the authority of the Nigerian state,’’ he said.

According to the governor, criminal gangs have become more daring and dangerous since recovering from their near defeat in 2015.

‘’As the lead agency for domestic intelligence and counter-intelligence, the DSS has a vital role to play in providing the reliable information needed by the police and armed forces for the total defeat of these dangerous insurgents,’’ he added.

Mr El-Rufai also warned of the looming food crisis in the country because ‘’farmers in various communities are unable to go to their farms; that is when they are lucky not to have fled their remote villages under pressure from the criminals.’’