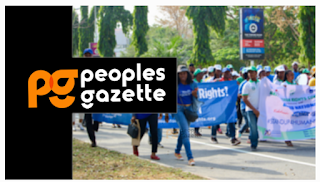 Peoples Gazette will on Saturday join the coalition of online media in a conference aimed at discussing the rights and freedom of digital platforms, in commemoration of annual Democracy day.

The conference tagged; ‘A conversation about Nigeria’s shrinking media and civic spaces’ holds in the wake of the Buhari regime’s suspension of Twitter operations in Nigeria.

The regime banned Twitter on June 4, over claims that the platform was being used to spread fake information and promote hate speech which threatens the corporate existence of the country.

It also directed that all social media platforms and online broadcasting service providers operating in Nigeria apply for broadcast licence with the National Broadcasting Commission.

The media organisations, in a joint statement on Friday, condemned the ban and regulations, describing it violation of freedom of expressions.

“The shutdown of social media platforms and subsequent forced regulations, violate the right to freedom of expression and access to information, contrary to Article 9 of the African Charter on Human and Peoples’ Rights,” the statement read.

It added that “A truly democratic society depends on citizens being able to hold informed opinions and express them – both in voting booths and in their day-to-day lives. It’s important that people are able to ask questions of the people in power and debate decisions which affect them and their fellow citizens. A Free and independent media is society’s greatest ally in achieving this.”

The conference holds by 02:00 p.m. on Twitter and is expected to feature independent journalists, traditional and new media platforms, civil society representatives and other stakeholders.