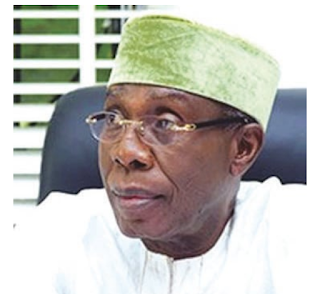 The Middle Belt Forum (MBF) and the Northern Consensus Initiative (NCI) yesterday disagreed on calls for secession from the country.

He objected to the remark by the NCI president, Dr. Auwal Abdullahi that “if there is going to be separation tomorrow, the North is ready for it.”

Bauchi State Governor Bala Mohammed, in apparent reaction to the separatist calls, said the North is capable of being economically independent because of the resources at its disposal.

However, Afenifere leader Chief Ayo Adebanjo said only a true federal constitution can halt the calls for disintegration.

Urging the agitators to embrace dialogue, the Presidency said that the national question cannot be resolved through the barrel of guns.

Pogu spoke in Abuja at “Nigeria’s 2023 Presidential transition and Inter-ethnic peace dialogue’ organized by a group ‘Youths Off The Street initiative (YOTSI). Its theme was: “Restructuring and 2023 power shift: Nigeria make or break factor.”

He said: “If my brother says the North is going, be sure the middle-belt is not going with you. You are on your own. We have served and sacrificed for this country. The war that occurred, the Middle-belt was used to fight while the North sat back to enjoy. The non-Hausa speaking part of the North has suffered the most from Boko Haram, bandits and herdsmen.

“We support the Afenifere in calling for restructuring and we are calling for electronic voting come next election. Not just voting, but voters registration, so everyone will have access to the real number of registered voters before the day of voting, so we are sure that 1000 people are not imputed when I0 vote.”

Abdullahi said: “I believe in Nigeria. I believe Nigeria will continue to exist. Whether we like it or not, there is a problem. We need to discuss the problem. We are disagreeing with ourselves and we have every reason to disagree. The North before now was saying we don’t believe in separation but as I’m standing, I’m telling you that if their is going to be separation tomorrow, the North is ready for it, we are also ready. Lets go our different ways.”

Adebanjo described the 1999 constitution as a fraud.

He said Nigeria required a new constitution instead of an amendment.

Adebanjo stressed: “It is firm contention of Afenifere that the 1999 Constitution is a fraud. Its preamble says ‘we the people of the Federal Republic.’  The question is, did we make the constitution? Are we federal? And with the number of constitutional and international lawyers this country is blessed with, President Buhari government now ask us to amend a constitution we never make, and to make logic stand on its head, the amendment is to be made by the National Assembly, which is a beneficiary of the fraudulent constitution. Afenifere believes the country needs a brand new constitution agreed to by all the nationalities in the country.

He said: “The idea of rotation from North and South is a historical imperative. It is what is non-negotiable .

The co-convener National Consultative Forum and Former Speaker House of Representatives, Ghali Na’abba, said governance has collapsed in Nigeria, as better people have been pushed to the sidelines.

He said: “There is almost no governance in Nigeria. We are governed by a weak government.”

Yesterday, the Presidency urged the agitators to come for a dialogue.

It said the various agitations and problems confronting the country won’t be resolved through the barrels of guns, urging Nigerians to shelve violence and embrace discussion.

The presidency admitted that things were “getting too hot,” following the killing of former President Goodluck Jonathan’s Political Adviser, Ahmed Gulak, and rising insecurity in the country.

Speaking at the 1st late Francis Olabode Johnson Foundation memorial lecture on Monday, Senior Special Adviser to the President on Niger Delta Affairs, Eta Enang, called on leaders to, by their actions and words, engage the youths intellectually and create jobs for them.

Enang said: “Things are getting too hot. This is not the Nigeria we thought would be. Please, Nigerians come to the table to discuss whatever are our differences. We would never resolve this with the barrels of the gun.

“I would want to tell Nigerian leaders that the youths are not looking for accommodation, they are looking for rights to participate. They are looking for equal opportunities. Let us, by our actions and words, engage the youths intellectually and create jobs for them. Let us not be happy keeping the youths on the streets and telling them that they are leaders of tomorrow. That tomorrow we told yesterday is today.”

Governor Mohammed said the North can survive economically due to the unlimited resources it has at its disposal.

He spoke when he received the Chairman of the House of Representative Committee for Zonal Public Hearing on the 1999 Constitution Review, Bauchi centre, Dr. Aminu Suleiman, in his office.

According to him, the belief in some quarters that northern states are depending on other federating states for survival is not true, adding that there was a time the region generated revenue for Nigeria.

Mohammed said: “We can not as northern states be completely dependent on the Federation Accounts  while we continue to be lamenting and passing the buck on the Federal Government.

“We have to free resources, there are a lot of resources in the northern states. We are not parasites.  We are capable of being independent. We can not be seen to just lean back and be taking resources from other federating states.”