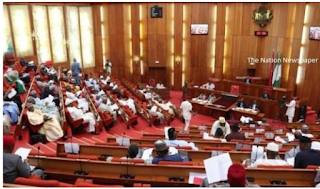 The call for a referendum to pave way for the writing of a new constitution for the country, topped requests at the national public hearing organised by the Senate Ad hoc Committee on the Review of the1999 Constitution in Abuja on Thursday.

There were also calls for the creation of a ministry of Chieftaincy Affairs and the assignment of roles to traditional rulers in the constitution.

The original indigenous development association also called for a state status for the FCT and the appointment of an FCT indigene as a federal executive council members.

This is even as women called for the creation of one additional senatorial district and federal constituency in each state of the Federation and the FCT to be reserved exclusively for women parliamentarians.

On their part, persons living with disabilities called for 15 per cent of legislative seats at the Federal, State and Local Government Councils to be reserved for disabled persons.

Senate in his remarks noted that public hearings are central to participatory democracy and the law-making process, “especially in a Constitution amendment exercise that seeks to put citizens first.”

He said the Senate therefore deemed it important to create avenues for the involvement of the public.

“That is why we did not merely stop at inviting people to make written submissions but have gone further to organise zonal hearings to give citizens greater opportunities to make inputs more than ever.

“Our country has been consistently reminded that there are flaws in our constitution. There is a deep concern among legislators and other stakeholders, just as there are divergent opinions on what we should do to remedy it.

“There are broad-ranging agitations and constitutional amendment proposals for devolving more powers to subnational governments, for resource control, greater representation and participation of women in governance and public life, return to the regional system of the post-independence era, creation of additional states and Local Government, enhanced residency and indigene rights, decentralized policing, and local government autonomy, amongst others.

“While we have identified certain items as thematic areas, we are still open to engagement on any other relevant proposal and we look forward to continuing discussions with stakeholders on all proposals in that regard.

“It is important to similarly note that agitations are democratic expressions and indications of dissatisfaction with our extant Constitution. Honestly engaging with each other, amid a good faith, is the best way forward.

“We recognise in the National Assembly that the underlying role of participatory democracy is not to replace representative democracy, but to supplement it and make it function better.

“Therefore, there are no preconceived decisions on the outcome of the process. The final product will be shaped by the voices of citizens as harnessed from the hearings.

“Regardless, the constitution review alone will not engender a successful democracy, without a concomitant shift in attitude and political will.

“It has to be backed by the requisite political will and the right attitude. Democracy demands the highest qualities of self-discipline, restraint, empathy, and the willingness to commit, concede and sacrifice for the general good.”

He said the committee was immensely impressed with the public response to the constitution amendment exercise and that it is eager to repay the confidence of Nigerians by ensuring that the final product reflects the inputs citizens have made to the process.

“As I have stated repeatedly since the inception of this committee, Nigerian citizens are the pillar upon which the Committee’s work is anchored, and the success of the amendment process will largely depend on their beneficent support and partnership.

“In addition to the memoranda the committee has received on a broad range of issues, we have also studied and engaged a select group of competent and non-partisan consultants to further examine specific recommendations from the reports of the 2014 National Conference and the All-Progressives Congress (APC) Committee on True Federalism requiring constitution amendment for implementation.

“The Committee has also revisited some of the bills in past constitution amendment exercises which did not pass the hurdles of concurrence with the House of Representatives, ratification by State Houses of Assembly and Presidential assent.

“We have painstakingly re-examined those bills and reintroduced some of the proposals we deem beneficial to our people.

“We are looking at them to determine at what stage of the process they fell off the list and the reasons thereof, with a view to improving on them to suit the demands of our time and ensuring that they do not suffer the same fate,” Omo-Agege said.