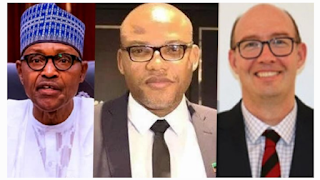 The British government has said Nigerian separatist leader Nnamdi Kanu was not arrested in the UK.

On Tuesday night, the British high commission in Nigeria, through its spokesman Dean Hurlock stated that Mr Kanu was not caught in the UK though they could confirm his arrest.

“We are aware of reports that Nnamdi Kanu has been detained in Nigeria by the Federal Government of Nigeria,” Mr Hurlock said in an email to the Gazette. “We can confirm that Nnamdi Kanu was not arrested in the UK for extradition purposes.”

Attorney general Abubakar Malami at a brief press briefing announced that security agencies apprehended the leader of the proscribed Indigenous People of Biafra (IPOB) on Sunday.

Mr Kanu was arraigned at the Federal High Court, Abuja, where the court ordered that he be remanded until the continuation of his trial set for July 26.

His remand came after the counsel to the attorney general, Labaran Shuaibu, informed the court that Mr Kanu was rearrested after jumping bail. Mr Shuaibu prayed the court to remand Mr Kanu in a State Security Service facility pending his trial.