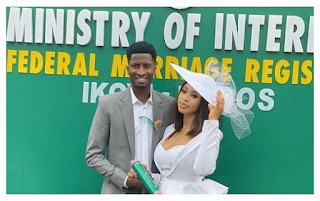 The duo, whose marital intentions became public after their wedding introduction in March 2021, are now legally hitched.

According to reports, the wedding took place at the Ikoyi marriage registry in Lagos on June 11, 2021.

The comedy star proceeded to share the good news with her fans as she displayed pictures from the event on her Instagram page.

“Mr and Mrs Olayinka,” she captioned.

Fans and well wishers of the actress expressed their excitement as they congratulated her.