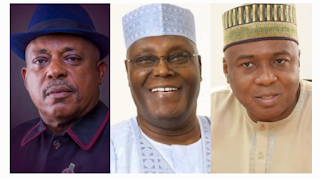 Concerned PDP League has called on PDP leaders to lead a one-million-man march against insecurity and poverty in Nigeria just as it demanded the resignation of the party’s National Chairman, Uche Secondus, and the chairman of Board of Trustees, Walid Jibrin.

“They should lead one-million-man protest against the daily killings, hunger, increase in food price, insecurity, delay in the passage and signing of the Electoral Act,” he said.

He also expressed the concern PDP might remain an opposition party for more years.

“If care is not taken now, the way things are going, we may remain as opposition party again at the centre and more states for another eight years,” stated Mr Daboikiabo. “In all, we at the bottom of the party’s ranking pyramid suffered the most whenever our great party loses elections.”

According to him, the PDP leaders should have used the non-passage and signing of the Electoral Bill and other challenges to promote the party.

Mr Daboikiabo accused Mr Secondus and other PDP national leaders of failing to provide the “desired proactive, active and strong” opposition party, increasing internal crises, court cases, and the defection of some PDP leaders at the state and local chapters.

Mr Daboikiabo claimed the PDP BoT chairman did nothing to make Mr Secondus and his team abide by the party constitution.

“In consonance with our great party constitution as amended 2017, as party patriots, we have expressed our concerns, grievances, and demands via the avenues provided in the form of petition and request letter to meet with some of our leaders. But all these channels had proved abortive,” he said.

Regarding the PDP crisis in Nigeria, Mr Daboikiabo said, “The party leadership should uphold the suspension of the former Niger state Governor, Dr Mu’azu Babangida Aliyu. The party should commence work at the PDP national permanent secretariat.

“The party should pay the house allowance of the disengaged staffs as worked out by the then caretaker committee chairman, Sen. Ahmed Makarfi, as approved by the NEC, to put an end to a court case over the matter.”

Mr Daboikiabo also called on the Senate and its committee on INEC to reject Lauretta Onochie as a national commissioner.

“Her nomination is inconsistent with any and every electoral law in Nigeria, most especially section 153 subsection 3 and item F, paragraph 14(2)(c) of the Third Schedule of the 1999 Constitution as amended. The keyword and phrase are partisan and unquestionable integrity, respectively.”