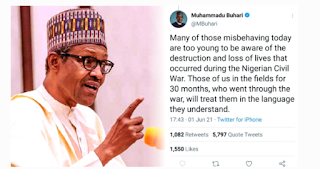 President Muhammadu Buhari on Tuesday faced a fresh backlash following a tweet on insecurity, one which Nigerians have tagged “genocidal” and declaration of war on the Igbos.

Many Twitter users are now reporting the highly offensive tweet enmasse, deeming it short of the micro logging site’s rules.

In the statement shared on his Twitter page, Mr Buhari warned that those responsible for the destruction of the facilities of the Independent National Electoral Commission (INEC) “will soon have the shock of their lives. We’ve given them enough time.”

Forty-two INEC offices have in recent times been destroyed, particularly in the South-East and South-South regions of the country.

After a series of criticisms on the current administration’s incompetence in combating the multiple conflicts in the regions, the president took to his social media page to send a strict warning to citizens, noting that culprits would be “treated in ways they understand.”

“I received a briefing today from the Chairman of the Independent National Electoral Commission (INEC), on the series of attacks on their facilities nationwide. These attacks are totally unacceptable, and we will not allow those behind them to achieve their evil objectives.”

The president vowed that government would tow the path Nigerian state took during the civil war to address the current challenges.

Nigeria fought a bitter civil war where at least three million Igbos were reported killed in the genocide that lasted between 1967  and 1970.

“Many of those misbehaving today are too young to be aware of the destruction and loss of lives that occurred during the Nigerian Civil War. Those of us in the fields for 30 months, who went through the war, will treat them in the language they understand,” the president stated. 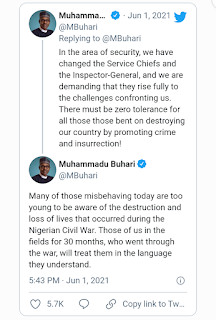 Mr Buhari’s declaration triggered a flurry reactions from Nigerians who lambasted him for his  “very unpresidential statement” and a threat to the Igbos.

Many users also alleged that the president’s statement was an effect of the sit-at-home order by the proscribed Indigenous People of Biafra (IPOB) in the South-East region.

Nigerians thereby called for his immediate suspension on the platform, while recalling how former U.S. President Donald Trump was permanently suspended “due to the risk of further incitement of violence”.

“Really now? Are you by any means threatening us? With all due respect sir, People voted u into power. Do not attempt to kill any more innocent Nigerians, otherwise the chaos and catastrophe that you’re looking for will be too much for you to handle,” a user @Glory Sambo wrote.

Also slamming the number one citizen, another user @Abalonapapi wrote “Effect of Nnamdi Kanu’s #SitAtHome order. All i see here is I’ll kill Igbos, I’ll wipe them away from this earth @jack do the needful because this guy is instigating genocide.”

“These words were chosen on purpose to taunt, trigger, traumatize, and terrorise Igbos by threatening to visit genocidal war on the son as on the father. They should earn an irrevocable anathema for the person in whose name they were written, and for the person who wrote them,” @Andy Obuoforibo wrote.

Meanwhile, Mr Buhari’s statement contradicts a part of the Twitter policy which states that “You may not threaten violence against an individual or a group of people.”

The social networking service is yet to respond to The Gazette’s email seeking comments on Mr Buhari’s tweet.