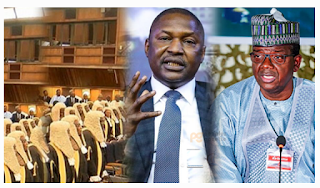 Governor Bello Matawalle of Zamfara has lavished car gifts on judges in the state to mark his second anniversary in office.

The beneficiaries of his largesse were all chief registrars, the Judicial Service Commission members, magistrates, including Sharia Court judges in the state.

According to the governor, the gifts will ease their transportation needs.

Justice minister Abubakar Malami presented the vehicles held at the Government House in Gusau as part of activities marking the second year of the Matawalle-led administration.

Mr Matawalle stated that the vehicles were part of 330 brand new Hyundai cars purchased by his government at the cost of N4.5 million each for distribution to different workers in the state.

Acknowledging the importance of the judiciary, the governor said, “It is also in recognition of the exalted position of the judiciary in a liberal democratic tradition, particularly it being an independent government arm that works in the same spirit as the executive and legislative arms to ensure good governance.

“We dearly uphold the sanctity of the judiciary as a vital instrument of the dispensation of justice and interpreter of our constitution.”

At the inauguration of the lodge, Mr Matawalle disclosed that the project was part of a larger contract that included the construction of 18 executive chalets and the renovation of the Government House. The state had completed the latter projects at the cost of over N2.1 billion.

Last May, a legal icon Afe Babalola said he was sorry for Nigerian judges who drive rickety cars, live in rented apartments of built-up areas.