Tension in Seme as soldier shoots customs officer to death 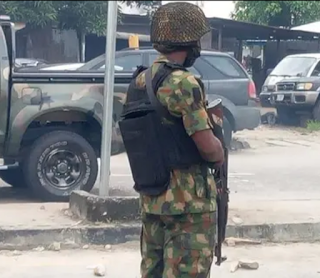 There is palpable tension in Seme as a Nigerian soldier in the early hours of Thursday, shot a Customs officer to death at the Lagos State/Benin Republic border point. This is even as the Seme Command of the Nigeria Customs Service (NCS) confirmed to Tribune Online that investigations are ongoing on the issue.

An eye-witness who spoke to Tribune Online said the incident aroused tension in the area over the fear of a clash between soldiers and Customs officers at the border.

According to the eye-witness who pleaded not to have his name in print, “The soldier was suspected to be under the influence of alcohol because no one expected him to behave in such a strange manner.”

Confirming the incident, the Spokesman of the Seme Customs Command, Hussain Abdullahi, explained that the incident is being investigated to know the motive behind the shooting.

“Yes, there was a shooting in the early hours of today from military personnel, and a Customs officer was killed in the process. Investigations are currently ongoing between the NCS and the Nigerian Army. The Nigerian Army has been fully briefed and investigations are currently ongoing,” the Seme Customs Command Spokesman said.

He, however, refused to reveal the identity of the deceased Customs officer while also refusing to disclose if it was a case of accidental discharge or shooting under the influence of alcohol.

Seme is a Nigerian community in Lagos that shares a border with Cotonou, the capital of the Benin Republic.