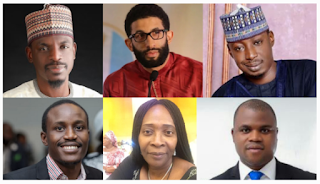 The quintet is known for their prolific tweets that often served as a megaphone of the regime’s achievements and instrumental in countering views critical of the federal government.

Mr Ahmad, an assistant to the president on New Media, vocal on Twitter, now spends more time and energy on Facebook.

On Saturday, Mr Ahmad posted on Facebook, “This is exactly the language they clearly understand,” to taunt the Nigerian Twitter community.

Mr Ogunlesi, well-known for his pro-Buhari propaganda tweets, has also stopped using the microblogging platform. Mr Ngelale, as senior special assistant to the president on public affairs, is also no longer tweeting.

It is the same situation with Messrs Obin and Usman, all making their last tweets four days ago. Similarly, another character in the Twitter trenches of the APC regime is Iyabo Awokoya. However, Ms Awokoya was observed to have tweeted on Sunday, despite the ban.

The quintet is popular for using their Twitter accounts to push policies and information on behalf of Mr Buhari’s regime, an embattled government, to thousands of their followers.

Minister of Information and Culture, Lai Mohammed, announced the suspension in a statement signed by his media aide Segun Adeyemi, citing the persistent use of the platform for activities capable of undermining Nigeria’s corporate existence, the government said in a Twitter update.

Mr Mohammed has also directed the National Broadcasting Commission (NBC) to immediately commence the process of licensing all OTT and social media operations in Nigeria, it added.

Twitter does not have physical offices or data farms in Nigeria, but the blocking of access to the popular network could bolster allegations of repression long ascribed to the administration.

The announcement came a day after Twitter deleted tweets and videos posted on social media by Mr Buhari, which threatened genocide against the Igbo-dominated South-East.

Mr Mohammed had condemned Twitter’s action, saying it raised suspicion about the company’s intention in Nigeria.

The Buhari administration has recently adopted the tactics of forcing telecom networks to tethered connection to websites seen as critical.

In January, Peoples Gazette’s website was blocked by all mobile telecom networks following a secret directive from the government.