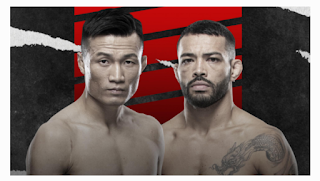 Nigerian-born Dan Ige suffered a setback in his bid to rise through the ranks in UFC as he lost to the “Korean Zombie” Chan Sung Jung on Sunday in Las Vegas.

Despite the result, it wasn’t an easy win for Jung as both men exhibited their technical abilities. Ige was outclassed by the more experienced Jung.

The major part of round one was evenly matched. Jung had a better stint at the end of the round. Round two saw Ige get dropped on the mat by an overhand right from Jung. Ige was on the defensive throughout the round.

Round three was also in favour of Jung after he took down Ige early on and took control till the end of the round.

Ige tried to get momentum in round four with a number of punches from the start but was caught while attempting a body kick as Jung took him down again.

Round five was the most exciting as Ige came out all guns blazing with several blows. But this didn’t take too long as Jung soon regained control after some clinching and take down attempts and a rear-neck choke. The loss becomes Ige’s second in three.

Jung’s performance over the years made Ige call him out for the bout but Ige’s attempt to outmatch his opponent proved abortive.