Why I didn’t pick southerners as MDAs, army heads - The Naija Weekly

Why I didn’t pick southerners as MDAs, army heads 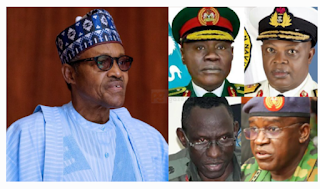 President Muhammadu Buhari has explained why he did not pick southerners to head the army and other top security outfits, including ministries, departments and agencies of government, insisting that his focus on merit.

Speaking in an interview with Arise TV, Mr Buhari asserted that he did not pick “just anybody to balance up,” rather, the positions have to be earned.

Citing the Nigerian National Petroleum Corporation (NNPC) and the military as instances, Mr Buhari said, “People who have been there for 18 years or even for 10 years trained in Zaria or in Abeokuta. They come through the ranks.”

He added, “And because they served under all the circumstances, the crises and everything and they gradually rise to that status, and you think you just pick somebody just to balance up? These positions have to be earned.”

Last month, the president appointed Mr Yahaya as the new Chief of Army Staff, to replace Ibrahim Attahiru who died in a plane crash, thereby sidelining senior officers from the southern region.

Criticisms trailed the appointment following the president’s disregard for the federal character principle.

A document showing the hierarchy of officers and obtained by Peoples Gazette also indicated that the president overlooked top officers in the southern region.