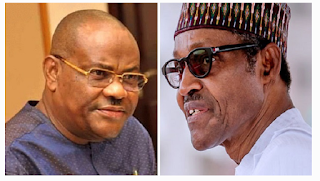 Rivers State governor Nyesom Wike has sent a callback to charge President Muhammadu Buhari over the president’s take that state governors should be responsible for the security of their domain.

Mr Buhari had, during an interview with Arise TV, said he turned back two governors from South-West who had come to complain about herdsmen killing people in their state’s and encroaching farmlands.

The president said he charged governors to look inward to resolve insecurity issues in their states, saying that was what they were elected to do.

He went further to say he dislikes governors who do not deliver on their campaign promises.

But reacting to the president’s assertion, Mr Wike cautioned Mr Buhari not to transfer his responsibility of security of lives and properties in the country to governors.

The Rivers governor said Mr Buhari should not just specialise on government borrowings but take charge of the country’s affairs as the Commander-in-Chief.

Mr Wike’s thoughts were conveyed in a statement by his spokesman Kelvin Ebiri on Tuesday.

He said it was inappropriate for the Mr Buhari, to shift his core duty on governors who do not have constitutional control of security assets.

“Mr President, you are the Commander-in-Chief of the Armed Forces of the Federal Republic of Nigeria.

“You appoint Inspector-General of Police, you appoint the Chief of Army Staff, Chief of Naval Staff, the Commissioners of Police, Director of Department of State Service, and other heads of security, Mr Wike said.

“Which one do we appoint? How can people appointed by Mr President be under me?”

Berating Mr Buhari for accumulating debts for Nigeria, Mr Wike said Buhari should be in charge in tackling insecurity in the country and not in accruing debts alone.

“It is not only to borrow money for Nigeria that you’re in charge. You must, also, be in charge of other things including security. Who signed order 10? Is it the governors?”, Mr Wike said.