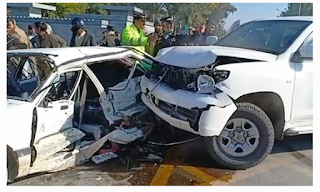 A passenger bus rammed into a container truck in central Pakistan on Monday, killing 28 people and wounding at least 40 more, the police said.

The bus was carrying workers from the industrial city of Sialkot in the province of Punjab to their hometown in the remote district of Dera Ghazi Khazi Khan, police official Hassan Khan said.

The investigation into the cause of the accident was still underway, but initial findings suggested the bus was speeding on a damaged road, Mr Khan said.

At least 40 passengers were wounded and were being treated in the hospital.

Most of the dead and injured were returning home workers to celebrate with their families the Muslim festival of Eid this week.

According to government statistics, bad roads, poorly maintained vehicles, and substandard traffic safety regime cause numerous accidents in Pakistan every year, leading to thousands of deaths.