Abba Kyari is a crime-buster, jealous FBI out to tarnish his image: Femi Fani-Kayode - The Naija Weekly

Abba Kyari is a crime-buster, jealous FBI out to tarnish his image: Femi Fani-Kayode 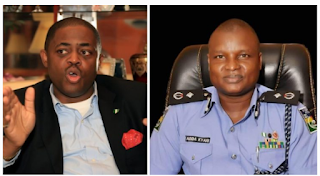 Former aviation minister Femi Fani-Kayode says the FBI is jealous of deputy police commissioner Abba Kyari and is out to tarnish the Nigerian crime buster’s image.

Mr Fani-Kayode took to Twitter in a thread of tweets, arguing that the FBI, leading the investigation that revealed Mr Kyari’s involvement with Ramon Abbas (Hushpuppi)’s fraud syndicate, was out on a smear campaign against the embattled police officer.

“A super cop that has risked his life protecting us from kidnappers, murderers and terrorists all these years and that has arrested more criminals than any other is accused of taking bribes from a Yahoo boy and scammer all the way from America, and we are expected to believe it? Not me!” Mr Fani-Kayode said in the first tweet of this thread.

Though his party had urged the federal government to take the FBI’s indictment seriously, the PDP chieftain described the investigation and indictment by the U.S. as “a deep conspiracy to destroy his career, and it will not work.”

He added that Mr Kyari had risked his life to protect Nigerians from murderers and terrorists. He added that he would not condemn the police officer unless he sees any evidence to the contrary.

Mr Kyari had denied any wrongdoing after Peoples Gazette on Thursday broke the news of his embroiling with Hushpuppi in a multimillion-dollar fraud.

Court documents revealed an order to arrest and detain Mr Kyari after Mr Abbas pleaded guilty to large-scale cyber fraud in the U.S. recently. The documents also exposed how Mr Abbas bribed Mr Kyari to arrest one of his gang members following a dispute presumably over the proceeds of crime. The police officer arrested and detained the gang member.

Claiming no wrongdoing, Mr Kyari, in a statement on Facebook, narrated how Mr Abbas called him two years ago to complain about a person threatening to kill his family.

He said the suspect was released after discovering there was no threat to anyone’s life, “and they are longtime friends who have money issues between them.”

“Nobody demanded a kobo from Abbas Hushpuppi,” Mr Kyari added, claiming that he only introduced Mr Abbas, who paid N300,000 to his cloth vendor.