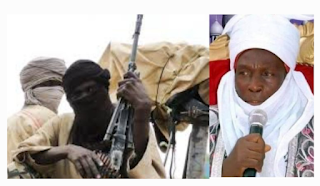 The 85-year old Emir of Kujuru, Alhassan Adamu, has just been released by his abductors, BBC Hausa reports.

The broadcaster said that his eldest son, Musa Alhasan Adamu, who is also the Madakin Kajuru revealed the development.

“We were just sitting when the Emir entered the palace,” the son was quoted to have said while adding that 13 other abducted persons are still with the abductors.