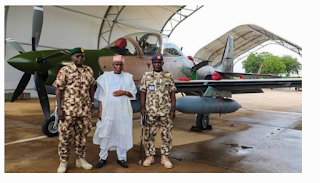 Amid military plane crashes, the Nigerian Air Force (NAF) on Thursday took delivery of the first batch of six A-29 Super Tucano aircraft from the U.S.

In May, the U.S. Air Force Fighters and Advance Aircraft Directorate told Nigeria that its 12 Tucano jet fighters would be ready for delivery between July and October.

The Director of Public Relations and Information, NAF Headquarters, Air Commodore Edward Gabkwet, announced the arrival of the fighter jets in a statement in Abuja.

According to Mr Gabkwet, the aircraft arrived in Kano at about 12.34 p.m.

On July 18, bandits shot down one of the air force’s jets on an “interdiction mission between the boundaries of Zamfara and Kaduna.”

“A military aircraft King Air 350, has just crashed short of our Abuja runway after reporting engine failure en route Minna. It appears to be fatal. We should remain calm & wait for the outcome of investigation by the military while we pray for the departed soul/souls if any,” the minister said.

Mr Daramola said a Beechcraft KingAir B350i aircraft logged an engine failure on its way to Minna and crashed while returning to Abuja. All seven officials on board died in the crash, which triggered a massive explosion near the airport.