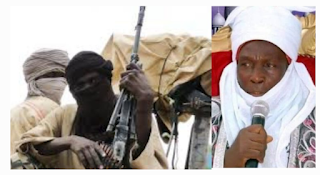 Bandits have abducted the Emir of Kajuru, Alhassan Adamu, and 13 of his family members, in an early morning attack in Kajuru Local Government Area of Kaduna State.

This is coming six days after the abduction of 121 students of Bethel Baptist School in Damishi town of Chikun Local Government Area in Kaduna.

It was gathered that the bandits in hundreds stormed the palace in the early hours of Sunday morning, firing gunshots, before carting away with the 85-year-old monarch and 13 members of his family.

Three women, two of his grandchildren, three of his aides and five others were abducted.

He said that a combined team comprising members of the Police Mobile Force, Operatives of Operation Puff Adder and Anti-kidnapping squad of the Kaduna State Police Command have launched a manhunt for the kidnappers, with a view to rescuing the victims and arresting the criminals, Channels TV reported.

Mustapha Abubakar Kajuru, editor of Taskira Hausa Newspaper, also confirmed that the bandits raided the palace in the early hours of Sunday morning.

“They abducted the Emir and the Salama of Kajuru, Alh Abubakar Kajuru and his grandchildren. All in all 13 family members were abducted with the Emir,” he said.

Expressing his concern, Mr Kajuru said the incident might be unbearable for the king.

“We are afraid the Emir might not survive it as he’s too old to undergo the rigours of trekking for hours,” he said.

As of the time of filing this report, there was no official statement from the police and the state government on the incident.