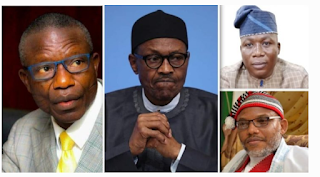 President Muhammadu Buhari will not succeed in silencing agitators like Nnamdi Kanu and Sunday Igboho by clamping down on them without good governance, warns Pentecostal Fellowship of Nigeria.

The Christian body urged Mr Buhari’s regime to focus on good governance and ensure equity, saying the arrest of leaders of separatist movements will not stop agitations in the country.

PFN President Pastor Wale Oke Thursday, at a press conference held at the Redemption Camp of the Redeemed Christian Church of God, Ogun, said that more agitators would continue to rise until the regime entrench good governance and equity.

“The only thing that will stop agitations is good governance, and by good governance, we are talking of the government where everybody feels that they have equal stake, equal opportunity, equal representation, Mr Oke said.

He added, “So long as some people feel marginalised and sidelined, there will always be agitators who will champion the cause of emancipation of their people.”

“We appeal to the government to make sure that there is equity in the participation and representation in governance by the people. Until that is done, agitation will never stop. If we silence Nnamdi Kanu and Sunday Igboho, others will rise.”

The IPOB leader was arraigned at the Abuja Division of the Federal High Court. He is expected back in court on July 26.