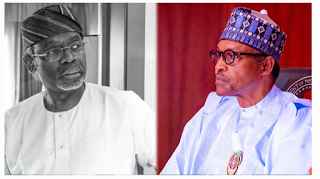 President Muhammadu Buhari will host House of Representatives lawmakers, including its speaker Femi Gbajabiamila at a lavish dinner tonight.

Although the letter seen by Peoples Gazette did not state the reason for the impromptu, exclusive event, Mr Gbajabiamila and his cohorts are expected at the State House Banquet Hall of the Presidential Villa, Abuja 8:00 p.m.

At various times, Mr Buhari has spent taxpayers’ funds on hosting his APC party members and other political cronies.

In January 2019, the president invited APC senators to a dinner. Later that year, he held a sumptuous feast for APC lawmakers in the House of Representatives in April.

He held a lavish party for governors- and senators-elect in 2019.

In 2018, the president hosted a dinner for aggrieved APC aspirants.

Amid dashed hopes of much-changed Nigeria under Mr Buhari, Nigerians have continued to rail against what they describe as the regime’s insensitivity to worsening poverty and the disregard for the rule of law. The nation’s debt profile has also continued to rise.