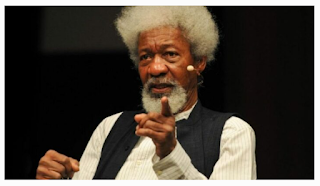 Nobel Laureate Wole Soyinka has said that the President Muhammadu Buhari regime acted in a criminal fashion against Sunday Igboho, adding the Nigerian government tender apologies to the agitator.

The State Security Service, last Thursday, stormed the home of Mr Igboho, an agitator for the realisation of a sovereign Yoruba nation, killing two persons and declaring him wanted, claiming that he is planning an insurrection against the country.

Mr Soyinka, who spoke with the BBC Pidgin on Monday, described the raid on Mr Igboho’s house as bizarre, asking the government to apologise to Mr Igboho.

“My advise to the government is that they should stop pursuing Igboho as a criminal, because you have begun by acting in a criminal fashion against him,” Mr Soyinka said.

He added that “I think they should tell Igboho ‘we made a mistake, we should not have acted in this way. You are no longer wanted, go back to your home. In fact escort him to his home and let him resume his normal life.”

The Nobel Laureate further said Mr Buhari will be embarrassed should Igboho be charged to court for trial.

“If and when Igboho comes to trial, I guarantee you the government will be very embarrassed,” Mr Soyinka said.