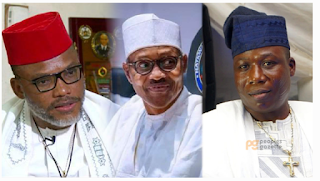 Speaking during an interview with VOA Hausa, Mr Shehu alleged that the separatist leaders had top Igbo and Yoruba individuals backing them.

He also disclosed that security agencies were currently conducting investigations to uncover the secessionist sponsors and financiers.

Justifying the invasion of Mr Igboho’s home, Mr Shehu, who acknowledged the Yoruba separatist’s right to expression, accused him of possessing illegal arms.

The Igbo separatist leader is accused of orchestrating the killing of 60 persons and the destruction of property in 55 violent attacks across the South East and South-South in four months.

The federal government stated this in a letter to Western diplomats. The letter, dated April 26, 2021, detailed the atrocities committed by IPOB on the instruction of Mr Kanu while in exile.

Mr Igboho is accused of planning a “violent insurrection against Nigeria.”