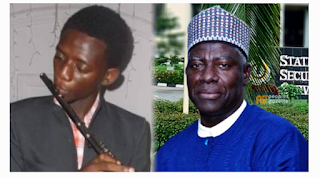 Samuel Iwatonaiye, a visually impaired #BuhariMustGo campaigner who was arrested alongside four other activists at the Dunamis Church in Abuja, has been denied bail and medical attention by the brutal State Security Service (SSS), despite widespread outrage and call for his release.

Mr Iwatonaiye was arrested on July 4 alongside four other activists while campaigning against widespread poverty and insecurity at the headquarters of Dunamis International Gospel Centre in Abuja. The visually impaired activist, alongside Ben Manasseh, Emmanuel Larry, Anene Victor Udoka and Henry Nwodo, were handed over to the SSS by church security officers for wearing shirts marked “BuhariMustGo.”

The activists have now been in the custody of the SSS for three weeks without being charged with any crime. The SSS has also denied them access to lawyers and family members in violation of the 1999 Constitution that guarantees the fundamental rights of citizens.

Mr Iwatonaiye’s health condition has continued to deteriorate with the SSS turning down all pleas to allow his doctors to visit him or release him to his family, Sahara Reporters said on Friday.

The SSS has an antecedent of grave violation of human rights, disobedience to court orders and disregard for the rule of law.

The activist’s illegal detention questions the democracy of Nigeria and the recognition of the supremacy of the rule of law, said Femi Adeyeye, spokesman for African Action Congress (AAC).

“What this unfortunate issue has shown is that the regime by actions, has suspended the Constitution and it is running the country like a mafia empire with agents scattered everywhere,” Mr Adeyeye told Peoples Gazette on Saturday.

Mr Adeyeye also condemned Paul Enenche, the founder of Dunamis Church where the activists were arrested, as an ‘agent’ of Buhari regime.

“Pastor Enenche has proven to be one and that is why he could not even mutter any word of condemnation. What’s their offence? But the same man would mount the pulpit to claim he’s a critic of the regime. These are all lies to fool the unsuspecting audience,” Mr Adeyeye said. Mr Enenche was at the scene when Mr Iwatonaiye and others were arrested but denied involvement. He, however, maintained that it was the SSS who arrested the activists, contradicting the initial denial of the secret police.

“We ask that they are freed immediately and unconditionally,” Mr Adeyeye added.

The Gazette reached out SSS spokesman Peter Afunnanya, but he declined calls and messages about the prolonged detention of Mr Iwatonaiye and other activists without medical attention or court charges.