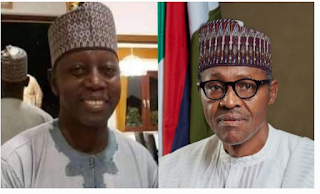 Adamu Abdulhamid, Nigeria’s newly appointed ambassador to the World Trade Organisation did not obtain a master’s degree in Business Management and Leadership from London Graduate School, UK, as claimed, the institution has told Peoples Gazette.

President Muhammadu Buhari on Wednesday approved the appointment of Mr Adamu who was the Acting Head, Chargé d’ Affaires of Nigeria Trade Office to the WTO, Geneva, Switzerland.

The appointment was contained in a letter sent by the Office of the Chief-of-Staff to the President, Ibrahim Gambari, to the Minister of Industry Trade and Investment, Niyi Adebayo.

“The President, Muhammadu Buhari, has approved the appointment Dr. Adamu Mohammed Abdulhamid, as the new Nigeria’s Ambassador to the World Trade Organization, Geneva Switzerland for a period of four years,” the statement partly read.

Mr Adamu was said to have an Msc. in Economics and International Development from Clermont Ferrand University, France, a master’s degree in Business Management and Leadership from London Graduate School, UK, and a Doctorate of International Relations and Economic Diplomacy from the Commonwealth University, UK.

But London Graduate School confirmed to Peoples Gazette that he did not graduate from the institution and was never a student.

“The individual you mention (sic) is not known to us and has not been a student with us at any time,” the institution said in an email.

It also stated that students are not directly admitted into the institution, as it lacks degree awarding powers.

“London Graduate School is the delivery arm of OTHM Qualifications, a UK regulated awarding body and as such we do not take students directly. We do not have degree awarding powers however we provide Top up Degrees validated and awarded by our partner, University of Chichester as published on the University website,” the institution added.

A phone number for Mr Abdulhamid did not connect throughout the weekend. The Gazette has reached WTO headquarters in Geneva for comment.

Mr Abdulhamid joined the Nigerian civil service years ago and has risen to the directorate level. He has been operating as Nigeria’s charge d’affaires at WTO after being posted by the federal trade ministry in Abuja until his nomination as full ambassador by Mr Buhari.

Many prominent persons have been involved in certificate alteration and forgery which has somewhat become a norm in struggles to hold public offices.

Among those who have been embroiled in certificate forgery which is a criminal act are former finance minister Kemi Adeosun and the Chairman of the Special Presidential Investigation Panel for the Recovery of Public Property, Okoi Obono-Obla.

Adeosun resigned as a minister in 2018 after it was uncovered that she forged her National Youth Service Corps (NYSC) exemption certificate.

In her resignation letter, the former minister admitted that the certificate presented was not genuine.

However, the Abuja Division of the Federal High Court on Wednesday held that the NYSC certificate based on the Constitution was not a mandatory requirement to hold a political office in the country.

In 1999, Salisu Buhari was forced to resign as the Speaker of the House of Representatives after being exposed for parading a fake degree from the University of Toronto, Canada.