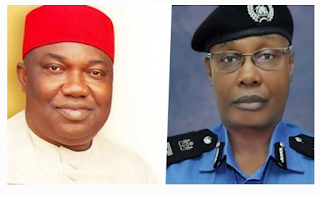 Mr Ugwuanyi announced the job offer when he paid a condolence visit to the bereaved families, promising to pay three months’ salary of the deceased.

He said the widows had an option of scholarships for their children up to the secondary school level or automatic employment.

The governor did not state whether the job would be a political appointment or employment in the state’s civil service.

Responding on behalf of the two widows, Janet Okuma thanked the governor for his kindness by coming to console them, in addition to the employment offer.

Also, the father of one of the deceased, Christian Nnaji, expressed gratitude to Mr Ugwuanyi for what he described as his “rare gesture.”

The police spokesman in the state, Daniel Ndukwe, had earlier in a statement issued in the wake of the killing of the officers disclosed that preliminary investigations on the matter had commenced.

The governor was accompanied by a team of senior police officers, including ACP in charge of State Criminal Investigation and Intelligence Department, Fidelis Ogbara.

Timothy Tion from Benue and Emeka Nnaji from Owo in Nkanu local government area were separately shot dead on Wednesday by unknown gunmen.

While the gunmen killed Mr Tion at Obeagu-Amechi in Enugu South, Mr Nnaji was shot dead at Amagunze in Nkanu East.