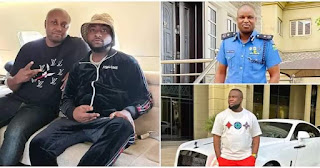 Singer Davido’s aide, Isreal Afeara, has been reportedly kicked out of the Davido Worldwide Music (DMW) camp over recent comments publicly made about Ray Hushpuppi and deputy commissioner of police (DCP) Abba Kyari on social media.

According to reports making the rounds online, a source in the DMW crew disclosed that Isreal’s comment did not sit well with Davido hence the reason for his suspension.