Disturbing kidnapping of schoolchildren going on in Nigeria: UN - The Naija Weekly

Disturbing kidnapping of schoolchildren going on in Nigeria: UN 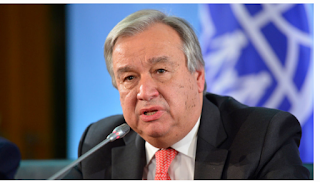 The UN has raised the alarm over protracted schoolchildren kidnapping in Nigeria, noting that it is disturbing.

A spokesperson for Mr Guterres, Stephane Dujarric, said this while briefing correspondents at the UN headquarters in New York.

Bandits abducted no fewer than 140 students from the boarding school on Monday.

Mr Dujarric said, “I can tell you that the secretary-general strongly condemns the abduction of students from the Bethel Baptist School as well as hospital employees in two separate incidents in Kaduna state on July 5.

“The secretary-general is disturbed by the frequency of ‘kidnapping for ransom’ of predominantly children from schools by extremist groups and criminal networks.”

According to him, Mr Guterres underscored the need to bring perpetrators of the grave human rights violations to account and enhance the safety and security of schools and educational facilities.

Briefing on Mozambique, Mr Dujarric said the World Food Programme (WFP) had warned that, without urgent funding, the displacement crisis in the north of Mozambique could become a hunger emergency.

He said displacement had left at least 730,000 people in Cabo Delgado with no access to their land and no means of earning a living.

“Close to 230,000 people are highly food insecure, according to the latest food security data, which was collected before the attacks in Palma. This number is projected to increase during the lean season, which begins in October; many of those who fled the violence in Palma are being hosted by locals.

“The added pressure on already scarce resources is impacting host communities struggling themselves with rising food prices and loss of income due to the pandemic,’’ he said.

According to UN data, in some districts, the host communities are as food insecure as those who are displaced, noting that in these situations and always, children are the most impacted.

“WFP is urgently appealing for $121 million until the end of the year to support 750,000 people in the northern districts of Cabo Delgado,’’ he stated.