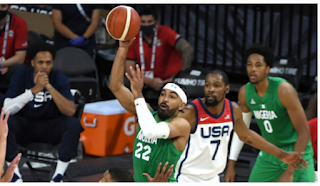 Nigeria’s male national Basketball team, D’Tigers, caused a major upset as they defeated their United States counterpart in a preparatory match ahead of the Tokyo Olympics.

Matched with arguably the best team in the history of national basketball, D’Tigers shocked the United States with a 90-87 win in what was the start of a series of exhibition games.

The U.S. men’s team have never lost to an African side before, in fact, the last time they were matched against Nigeria, they won by 43 points in an exhibition in 2016. This after the embarrassing 156-73 blowout at the 2012 London Olympics.

The U.S. fielded a strong team of NBA stars. Many, including today’s starters; Kevin Durant, Jason Taytum, Bradley Beal and Bam Adebayo are not to far removed from competing in the ongoing NBA playoffs.

The U.S. started very well but Nigeria kept the game close by knocking down three pointers and playing physical, highlighted by Achiuwa’s block on Kevin Durant with 1:23 left in the half.

At halftime, the U.S. lead 43-41. The U.S. raced to a 52-43 lead in the 3rd quarter but Nigeria cut the deficit and kept it close. By the late 4th quarter, Nigeria had taken the lead and stayed very focused to finish the game on top despite a late surge by Kevin Durant and the U.S. team.

Riding the wave of confidence, D’Tigers will look to keep building momentum when they play Argentina next on Monday. The US will face Australia on Tuesday.