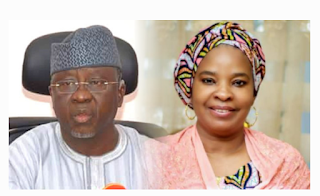 The Economic and Financial Crimes Commission (EFCC) has arrested former Governor Tanko Al-Makura of Nasarawa and his wife, Mairo, over multibillion-naira fraud.

Mr Al-Makura, a senator, was arrested on Wednesday evening.

A source reported that EFCC operatives grilled the couple deep into the night at the anti-graft headquarters in Abuja.

The source did not give details of the allegation relating to their stealing public funds against the ex-governor and his wife.

When contacted, the spokesman for the EFCC, Wilson Uwujaren, declined to comment on Mr and Mrs Al-Makura’s arrest.

Mr Al-Makura was Nasarawa governor between 2011 and 2019 before he was elected as a senator representing Nasarawa South Senatorial District at the National Assembly.