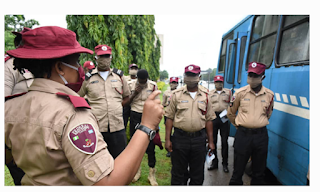 The Federal Road Safety Corps (FRSC) in Niger says it is deploying 717 personnel to ensure free traffic flow during the forthcoming Eid-el-Kabir celebrations in the state.

The Sector Commander in the state, Musa Mohammed, disclosed this in Minna on Friday.

Mr Mohammed said the personnel included 540 special marshals who would carry out a 24-hour patrol on the highways.

He added that the command would deploy 20 operation vehicles, three ambulances, three motorcycles, and one heavy truck in the state.

“The command will embark on special patrol on Minna-Bida-Mokwa, Suleja-Minna–Lambata–Agwai- Bida and Minna–Zungeru–Tegina- Kontagora roads. The personnel are expected to monitor drivers and ensure safe driving with observance of traffic rules and regulations.

“We have deployed sufficient personnel in the metropolis and across all major highways to check the activities of reckless drivers,” he said.

He also called on the motorists to desist from making phone calls while driving and urged parents/guardians against allowing underaged children to be on the wheels.

Similarly, the police command in the state said it would provide security during the Eid el-Kabir celebrations. The command’s spokesman Wasiu Abiodun disclosed this in a statement issued in Minna on Friday.

had been issued to the officers deployed for that purpose.

“We have mobilised sufficient armed personnel to provide security before, during, and after the festive period,” Mr Abiodun said.

He explained that the security measures would enable residents to observe the celebrations in a peaceful atmosphere.

According to Mr Abiodun, the police and other security agencies are working to ensure crisis-free festivities across the state.