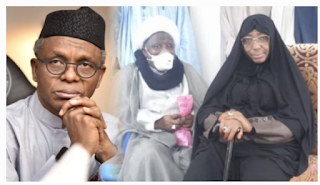 Governor Nasir El-Rufai’s government has filed fresh charges against the leader of the Islamic Movement in Nigeria (IMN), Ibrahim El-Zakzaky, and his wife, Zeenat.

The fresh charges came two days after the couple were discharged and acquitted by the Kaduna High Court, after pleading not guilty.

The spokesperson for Mr El-Zakzaky, Shuaibu Musa, confirmed this information to Peoples Gazette on Friday morning.

The charges are brought under the Treason and Treasonable Offences Act before a Federal High Court.

Mr El-Zakzaky and his wife first appeared before the court by the Kaduna government after a clash in Zaria between IMN supporters and soldiers in 2015, where the soldiers killed about 300 protesting Shiites.

Mr El-Zakzaky and his wife have been facing trial since 2015 on an eight-count charge bordering on culpable homicide, disruption of the public peace, unlawful assembly, among other charges.

On Wednesday, the government arraigned the couple amid tight security by prison operatives.

The lawyer representing Kaduna in the matter, Dari Bayero, had on March 31 asked the court to sentence the couple based on extant laws.

However, counsel to the defendants Femi Falana, after the proceeding, told journalists that the government had established no case to warrant the couple being in court.