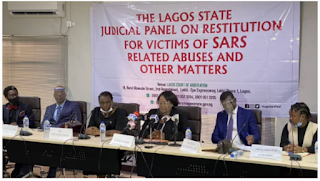 The Lagos state #EndSARS judicial panel has admitted the post mortem results of all 99 bodies deposited at the Lagos morgue between the 20th and the 27th of October 2020.

A consultant pathologist to the Lagos State Government, Professor John Obafunwa, presented the results in line with an order given in June.

The Chairman of the panel, Justice Doris Okuwobi admitted the documents in evidence after the counsel to #EndSARS protesters, Yinka Olumide-Fusika (SAN), moved for its admission.  This was done with no opposition from the other interested parties present.

In June, Ms Okuwobi had ordered Mr Obafunwa to present the post mortem reports he had conducted on all 99 bodies before the panel.

During the cross examination, Mr Olumide-Fusika had noted that Mr Obafunwa disclosed that the bodies were picked from different parts of Lagos between October 20 and 27, 2020.

“I want to prove to this panel that the claim that only three dead bodies were brought in from Lekki is not true,” Mr Olumide-Fusika had said.

The Chairman of the panel made the order after the pathologist testified that the coroner’s office conducted post mortem autopsies on 99 bodies during the period.

He had also testified that of the 99, only three bodies were labelled as #EndSARS Lekki.

The identities of all three male victims still remain unknown, though they were confirmed to be from the Lekki tollgate where soldiers opened gunfire on the protesters.

The protesters were singing the national anthem and demanding an end to police brutality when soldiers arrived in trucks and opened fire. The attack was carried out shortly after a curfew announced by the Lagos state governor, Babajide Sanwo-Olu.

The incident had been live streamed by celebrity DJ Switch, on Instagram. DJ Switch had counted seven persons who had died before her device went off, later updating the figure to fifteen.

Initially, the Nigerian Army denied being at the protest ground, stating that videos and photos from the scene were “doctored”, but later admitted their presence and claimed that shots were only fired into the air to enforce curfew.