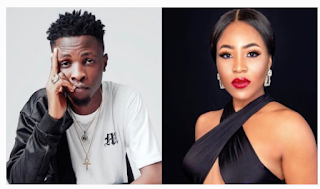 The duo took a video of themselves in peaceful company of one another to their respective Instagram stories, making the shocking announcement Saturday morning.

Despite starting out as friend in the lockdown season, Erica and Laycon had an epic fall out in the last BBNaija Season 5 which eventually resulted in Star Girl’s disqualification and Laycon emerging as the winner.

Just like every BBNaija season with potential a housemate armoured with a huge “fan base”, the fans of each star spent months in online militancy casting aspersions and throwing slurs at one another and the stars to defend their idols.

While some fans and viewers of the show seemed unhappy with the reconciliation, some were thrilled by the news and commended the duo for exhibiting “maturity”.

Thank you Jehova. I knew that eventually, they’ll solve their issues. Thank God

“I wanted Erica to be my last Stan! And she has failed me..

I wanted Erica to be my last Stan! And she has failed me..

Both of you should getat 😡

However, many are still finding it hard to swallow the latest make up between Laycon and Erica after tearing bridges with other fan bases in the name of loyalty and affection to their star.

“Now that Erica and Laycon made up, what happens to the people who beefed on their behalf?” @joannmukwano tweeted.

Some BBNAIJA viewers question the timing of the reconciliation and concluded it might be a way of the duo trying to divert the attention from the next season which is set to premiere later on Saturday and Sunday.