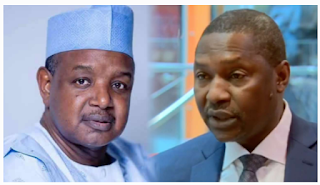 Nigeria’s justice minister Abubakar Malami says Governor Atiku Bagudu of Kebbi remains the APC leader in the state as the ruling party attempts to keep a united front ahead of future elections, particularly those of 2023.

Mr Malami, who is also the country’s attorney general, while pledging sustained loyalty to the governor as the party leader in the state, also paid tributes to other party leaders and members.

According to him, the president is the national leader of APC, while in states, governors are the leaders.

“In Kebbi, Bagudu, therefore, remains the leader of the APC, and I call for (an) unflinching loyalty to the decision of the governor from all members of the party,” said Mr Malami.

Meanwhile, Mr Bagudu has pledged to uphold the tenets of democracy by allowing people to elect people of their choice through a transparent exercise during the forthcoming APC ward congress, scheduled for July 31 (Saturday).

Mr Bagudu, also the Progressives Governors’ Forum chairman, stated this during the APC stakeholders’ meeting held in Birnin Kebbi on Wednesday, preparatory to the upcoming congress.

The governor assured party stakeholders and members of the APC that honesty and justice would form the basis of the forthcoming ward congresses in the state.

Bagudu further stated that consensus candidacy is not new to the party in the state, saying it was deployed severally at all levels.

The governor said, “We had hitherto used this all-important strategy, and it was significantly effective and beneficial to all of us. That is why we have also provided some windows to voice out agitations, just as we have also vowed to be just and fair to all.”

Speaking further, he stated, “Leadership aims at fostering peace and unity instead of discord and disharmony. These are what we will continue as well as protect.

“APC and its leaders at all levels will continue to protect the dignity of all the stakeholders as we are all equal shareholders in the party.”

The governor commended all stakeholders for their unprecedented support and cooperation while assuring that the exercises would be hitch-free.