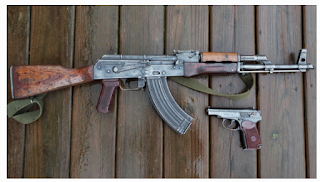 A gun runner and two armed robbers have been arrested in Kaduna State.

This is contained in a statement issued by the Command’s spokesman, ASP Mohammed Jalige, on Friday in Kaduna.

“The operatives of the Kaduna police, attached to the Kafanchan divisional headquarters, acted on information from a good Samaritan and intercepted an Opel Vectra vehicle with registration number KAF 733 MK driven by one person on July 28 at about 4:00 p.m.

“When a careful search of the suspicious vehicle was conducted, an AK47 rifle and two packets of 12-gauge shotgun shells that were concealed in the engine compartment of the car were recovered.

“Investigations are ongoing and the suspect has provided useful information to the police that will facilitate further breakthroughs,” Mr Jalige said.

He added that two suspected armed robbery and car-snatching syndicate were also arrested.

“The two suspects were arrested on July 26 and July 28.

“While on surveillance patrol within Sabon Gari area of Zaria, operatives of the command intercepted a Honda Civic vehicle with registration number NSR 92 HH driven by one person.

“A search of the said vehicle resulted in the recovery of an English Makarov pistol with one round of live 9mm ammunition and two fabricated revolver pistols.

”Investigation is being diligently carried out to retrieve some of their stolen vehicles, apprehending other gang members and equally recovering more of their operational weapons.

“The suspects will be charged to court upon completion of the investigation,” Mr Jalige added.

He solicited support from the public in the area of intelligence and urged prompt report of suspicious activities or persons to the nearest security outfit.