I withdrew my son from public school for the security of other children: El-rufai - The Naija Weekly

Home News I withdrew my son from public school for the security of other children: El-rufai

I withdrew my son from public school for the security of other children: El-rufai 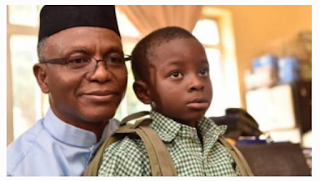 Kaduna State governor Nasir El-rufai said he withdrew his son from public school in order to protect other children from possible attacks by kidnappers.

Mr El-Rufai, who had in his campaign for a second term promised to enroll his children in public schools, enrolled his son in Capital School, Kaduna two years ago, a move seen by many as a political scheme to portray Mr El-rufai as a populist and a leader who keeps his campaign promises.

Speaking to BBC Pigin on Friday, Mr El-Rufai said he got security reports that his son would be kidnapped to see if he would change his mind on paying ransom.

“We had to temporarily withdraw them for the security of the school because we received a security report that three groups were planning to attack the school and kidnap my son,” Mr El-Rufai said.

He further said though the school is well protected, he withdrew his son from the school because he feared that attack on the school could arm other children.

“I don’t think they (kidnappers) would have succeeded because there are enough security in the school to prevent them, but it would expose other pupils of the school to danger.

“We didn’t know the kind of weapon they would have brought. I had taken a stand against payment of ransom and we had report that, three groups were planning to kidnap my son from Capital School to see whether I will pay ransom or not if my son is kidnapped,” Mr El-Rufai said.

The governor’s silent withdrawal of his son from public school has been widely criticised as many ask why he did not make it public like the enrollment which dominated social media and major newspapers back then.