Igboho was disturbing peace with his campaign against Fulani herdsmen: Buhari - The Naija Weekly

Home News Igboho was disturbing peace with his campaign against Fulani herdsmen: Buhari

Igboho was disturbing peace with his campaign against Fulani herdsmen: Buhari 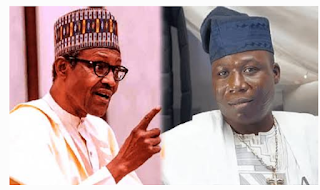 President Muhammadu Buhari Tuesday commended the State Security Service (SSS) for raiding Sunday Igboho’s home, describing Mr Igboho as a “militant” who has been disturbing the peace of the country under the guise of protecting his kinsmen from Fulani herdsmen attack.

Last Thursday, the SSS stormed the home of Mr Igboho, an agitator for the realisation of a sovereign Yoruba nation, killing two persons and declaring him wanted, while alleging that he owns cache of weapons and planning an insurrection against the country.

But Mr Igboho, who stood against Fulani herdsmen attacks on communities in Oyo State as government appears to do nothing about the menace across the country, has denied possessing illegal weapons, adding that the SSS planted arms in his house to incriminate him.

Mr Buhari, in a statement by his spokesperson Garba Shehu on Tuesday, however commended the SSS for raiding Mr Igboho’s house, saying Mr Igboho has been disturbing the peace under the guise of protecting fellow kinsmen.”

“In furtherance of continued diligent work, the State Security Service on Thursday, 1st July raided the residence of a militant ethnic secessionist, who has also been conducting acts of terror and disturbing the peace under the guise of protecting fellow “kinsmen”,” Mr Buhari said.

He further said that Mr Igboho’s “seditious utterances and antics, which he is known to have publicly expressed, have overtime morphed into very hateful and vile laden speeches.”

“It must be highlighted that the government respects fundamental rights of citizens to express their views and recognises this as a democratic tenet. However, any attempt to build an armoury coupled with plans either subtle or expressed to undermine our unity as a nation will not be condoned,” Mr Buhari said.

The raid on Mr Igboho’s home has been condemned by many. Human rights activist and Senior Advocate of Nigeria (SAN) Femi Falana said no law permit such raid, condemning the SSS for acting like armed robbers.

Nobel Laureate Wole Soyinka said President Muhammadu Buhari regime acted in a criminal fashion against Mr Igboho, adding the Nigerian government should tender apologies to the agitator for invading his home and destroying his property.

But Mr Buhari said “The successes of our security agencies must be commended as they have demonstrated significant deftness, guile and secrecy in carrying out these missions.

“This level of professionalism must be sustained and brought to bear as we focus on extracting from our society those who have found a new trade in targeting students, rural dwellers and our citizens in the North-West. The nation recognises their efforts and sacrifice.”