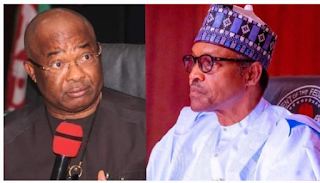 The UPC is an umbrella body of oil-producing local government areas in Imo.

The community appealed in a letter to Mr Buhari signed by its coordinator, Reginald Uwakwe.

“We, the Urashi Peoples’ Congress (UPC), an umbrella body of all the Oil Producing LGAs in Imo state, want to bring to your attention the urgent need for the correction of lopsided appointments in the leadership of the NDDC.

“The bias appointment which has persisted since the commission’s existence has assumed a critical and sensitive dimension of great concern,” said Mr Uwakwe.

He noted that “this development, if left uncorrected, is capable” of threatening the operations and truncating the activities of the NDDC.

While chronicling the beneficiaries of the lopsided appointments, the community told Mr Buhari that “a compromise was reached that the position would be rotated within the nine oil-producing states.”

“However, the appointments into the key positions implicitly confirm that the position of managing director of the commission especially has been skewed in favour of Rivers, Akwa Ibom, Bayelsa, and Delta.

“For the records, from 2001 to 2021, the list of managing directors and their states include Dr Godwin Omene, Emmanuel Aguariavwodo, both from Delta state; Timi Alaibe, Bayelsa; Chibuzor Ugwuoha and Dr Christian Oboh, both from Rivers.

“Others are Nsima Ekere and Dan Abia, both from Akwa Ibom; Nelson Brabaifa, Bayelsa; Joy Nunieh, Rivers; Kemebradikumo Pondei, Bayelsa; Okon Akwa, Akwa Ibom while executive directors of Finance/Administration and Project also from only these four states,” he said.

The letter stated, “Your Excellency, the crux of the matter is that this particular section of the Act has not been obeyed since the past 21 years the commission came into existence.

“Essentially, a cursory look into subsequent appointments made will further confirm that nobody from Abia and Imo states has been appointed into the management positions. Either as a managing director or executive director previously,” Mr Uwakwe added.

The letter noted further, “Sir, it is also imperative to note that Ohaji/Egbema and Oguta local government areas in Imo have the highest gas deposit in the whole of West Africa, currently explored by Seplat Energy Plc, SPDC and ANOH Gas Processing Company. These two LGAs in Imo house the highest number of oil wells and flow stations in Nigeria.”