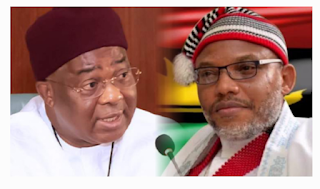 Governor Hope Uzodimma of Imo has declared that the hitherto troubled state is now safe and secure, willing and able to contain future threats.

Mr Uzodimma gave the assurance as he appealed to stakeholders and opposition political parties to collaborate with his administration to develop the state.

Imo has come under heavy attacks from unknown gunmen who target government establishments such as the police, prisons and  the electoral commission.

Major political figures, including the governor himself have not been spared in the onslaught.

Mr Uzodimma drew the ire of secessionist campaigners, the Independent People of Biafra (IPOB), over his opposition to the activities of the Eastern Security Network.

IPOB however claims the ESN was set up to protect Igboland from marauding Fulani herdsmen after the government failed to prevent their atrocities.

The death of the ESN commander Ikonso, which IPOB accused Mr Uzodimma of facilitating escalated security tension in the eastern heartland.

But the governor said the security situation in the state have improved markedly.

The governor said these during a stakeholders’ meeting which was held on Saturday in Owerri. He expressed belief that such collaboration would preserve peace and improve economic activities in the state.

“That vehicle called a political party should not be an instrument to destabilise the system, rather a veritable tool to keep the government in check by providing robust opposition,” he said.

The governor explained that the essence of the meeting was to brief the people on the security situation, as well as throw light on his record of stewardship in the past one year.

Mr Uzodimma said there had been an increase in the internally generated revenue from N600 million monthly to more than N1 billion monthly.

He said his administration had been able to revamp the state civil service, appoint 11 permanent secretaries and constructed or rehabilitated no fewer than 42 roads across the state.

“In the area of education our landmark achievement will include the establishment of the new University of Agriculture and Environmental Sciences, which is a full-fledged state-owned university,” he said.

“We are also rebuilding and re-equipping 305 health centres in the 305 wards to enhance primary health care delivery in the rural areas.

“This is, as we already have on ground, our mobile clinic arrangement which, with the help of missionaries, is dispensing free healthcare services to the rural people,” he said.

The governor pledged to ensure that his government worked for all, irrespective of local government, political party affiliation, religion or situation of birth.

“There would at all times be level playing ground for everybody and no one would be discriminated against or opportunities selectively created to favour anyone or group,” the governor pledged.