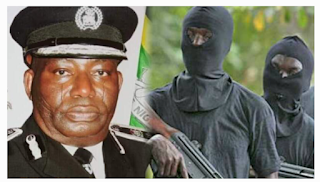 Police operatives engaged in a shootout with unknown gunmen in Njaba Local Government Area on Saturday, killing two while others retreated into nearby forests, says the Imo Police command.

Mike Abattam, the command’s spokesman, confirmed the development on behalf of police commissioner Abutu Yaro, in a statement in Owerri.

He said one AK47 rifle and an operational vehicle were recovered from the gunmen during the gun duel.

“On 31/7/2021 at about 0120 hours, a convoy of bandits moving towards Njaba town to launch an attack were intercepted by Operation Restore Peace team of the Nigeria Police,” the police narrated.

“In the ensuing firefight, one of their operational vehicle’s was demobilised and two of them neutralised, and the remaining ones scampered into the bush.”

Mr Abattam said the hoodlums had earlier detonated an improvised explosive device at a nearby police station in Njaba.

“They detonated an Improvised Explosive Device into the parking lots of a nearby Njaba Police Station causing minimal damage,” he said.

The police said it was still pursuing the escaped hoodlums in the Njaba forest, asking residents not to panic but report suspicious persons they may come across.

“Meanwhile, cordon and pursuant exercise is ongoing  in the area and members of the public residing in the area should not panic as the ongoing Police clearance operation is designed to root out violent criminals in that axis.

“Residents should avail Police with information of persons seen treating bullet wounds or hiding within the community,” the statement said.