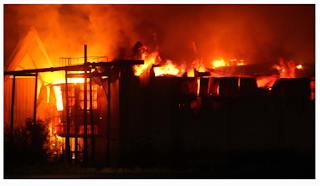 Meanwhile, the Nasiriyah News Network reported that 60 bodies so far reached the forensic medicine department in Nasiriyah, including 30 unidentified.

It added that people were flocking to the forensic medicine department to search for relatives.

The fire hit the isolation section for COVID-19 cases at Imam al-Hussein hospital on Monday night. Mr Bashar said 63 patients were in the section.

After the pandemic began last year, it was built and consisted of 20 caravans over a 600-square-metre area and designed to take up to 100 patients. While officials have not yet confirmed the cause of the fire, witnesses said it started when an oxygen cylinder exploded.

Prime Minister Mustafa al-Kadhimi suspended the heads of Dhi Qar Health Department, the hospital and the head of civil defence.

All three will face investigation.