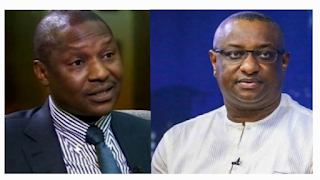 The Attorney General Abubakar Malami has countered calls by junior labour minister Festus Keyamo and others for the chairman of the caretaker committee of the All Progressives Congress, APC, Governor Mai Mala Buni of Yobe, to resign.

Messrs Malami and Keyamo are both members of the ruling APC and also both Senior Advocate of Nigeria.

In a 20 point statement released on Thursday, Mr Malami laid out his argument against the decision reached by the Supreme Court, describing the interpretation of the 1999 Constitution as “stretched.”

“Therefore, it is shocking that the interpretation of Section 183 of the 1999 Constitution, in light of the above-quoted decision of the Supreme Court, could be stretched in some quarters to state that chairmanship of an ad-hoc committee duly constituted by the National Executive Committee of a registered political party (by a registered member of the Party) could constitute paid employment or an executive position as envisaged under Section 183 of the Constitution,” Mr Malami wrote.

The Supreme Court judgment in the Ondo State governorship election appeal involving Governor Rotimi Akeredolu and Peoples Democratic Party’s Eyitayo Jegede, ended with the judges agreeing that it was illegal for Mr Buni to be the governor of Yobe State and also hold an elective position.

The 4-3 split judgement by the judges dismissed Mr Jegede’s appeal holding that he did not join Mr Buni in the suit where he is centre to.

Mr Malami asserts that the draftsmen of the Constitution would not have considered the position Mr Buni holds as an elective position due to its meritless nature, dismissing Mr Keyamo’s concerns.

“To further show the meritless nature of the position under review, assuming without conceding that the argument is right, then, it will equally be contrary to the spirit and intent of Section 183 of the Constitution for any sitting Governor to be Chairman of say the Governors’ Forum, Chairman of the Progressive Governors Forum, or any other similar body. This, in my humble view, can definitely not be the intention of the drafters of the 1999 Constitution,” Mr Malami said.

The Minister of State for Labour and Employment, Festus Keyamo had called on Mr Buni to resign immediately, following the apex court’s judgement.

He said the decision reached by judges of the apex court could be weaponised by persons aggrieved by the APC congresses and could challenge the competence of the Buni-led CECPC to organise the congresses and National Convention.

“…any other person affected by the actions of the Buni-led Committee will henceforth not fail to join him in any subsequent case in court,” Mr Keyamo wrote in a statement. “This includes any subsequent election matter in any part of this country and all the APC Congresses that are about to hold.”

Mr Keyamo also urged the party to stop all preparation and conduct of congresses nationwide.

The APC had, however, dismissed Mr Keyamo’s warning, insisting it would go on with the planned ward and local government congresses holding on Saturday.

Secretary of the caretaker committee John Akpanudoedehe alleged that Mr Keyamo and his ilks were just engaged in red herring due to their fears of impending losses at the congresses.

“I want to advise them to go into their wards and be a party man and a true politician.

“When you lose, you dust yourself and re-strategise, not to destroy the party by misinforming the entire public,’’ Mr Akpanudoedehe said.