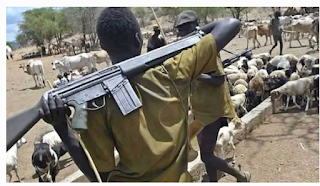 Two men, in connection with an attempt to rape an 18-year-old girl and injuring her in the process, have been declared wanted by the Kwara State Command of the Nigeria Security and Civil Defence Corps (NSCDC)

According to a statement released by the state command’s spokesman, Babawale Afolabi, the state commandant, Iskil Makinde, had received a report that Abdulahi Aisha, 18, was attacked by two Fulani men, who are now at large.

Mr Afolabi said that in an attempt to have carnal knowledge of the lady, they attacked the girl with cutlass and left her with a deep cut, due to her stiff resistance to prevent them from raping her.

“Some people later came to rescue the lady, while the suspects ran away, leaving the lady in a pool of her blood,” Mr Afolabi said.

He said that the cows belonging to the two suspects were seized by the people and taken into custody by the Sarkin Fulani of the community and Dogo Baluji of Miyeti Allah.

He said that the two leaders promised to fish out the perpetrators of the evil act and hand them to the law enforcement agencies for further action.