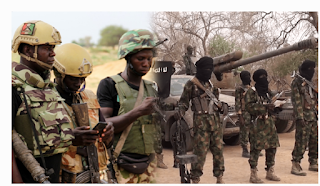 The Nigerian Air Force has attributed its “accurate” killing of Boko Haram and ISWAP terrorists to collaboration with other security forces.

NAF spokesman Edward Gabkwet stated that the “robust collaboration” amongst the forces boosted the ongoing counter-insurgency operations in the North-East and other parts of the country.

He noted that since the new service chiefs came on board, Nigerians had witnessed a renew vigour, synergy and efforts in tackling terrorists and bandits.

He attributed this to the resolve of the forces to “subordinate themselves under the leadership of the Chief of Defence Staff (CDS), and the Defence Headquarters (DHQ), in which the DHQ takes the lead in all joint operations.”

“Irrespective of the service they represent, they bring their platforms under the command and control of the joint task commander who uses them the way to better achieve the aim of defeating the insurgents and others.

“In short, we have never had such a synergy before that is the reason why the coordination has been better and we have been hitting our targets decisively.

“Precisely, for the last two months, the level at which we have been decimating the insurgents is just too accurate and that is what happen when you bring all your efforts under one umbrella.”

Mr Gabkwet recalled that on June 27, the NAF provided “close air support” to the ground troops at Bulayobe and in that operations, the troops destroyed three gun trucks and killed “so many” insurgents.

This, he said, prevented the insurgents from overrunning communities as well as the military bases.

He admitted that “this does not happen in the past.”

“Gone were the days when you heard that the insurgents overrun some localities and even the military base. But today, I can assure you that such can no longer happen.

“This is something Nigerians should be happy and proud about. No competition whatsoever among the services. There is only one trophy and that trophy is that we keep the country safe and its citizens to enable them go about their normal life without fear,” the NAF spokesman explained.