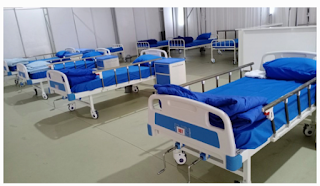 A burglar who allegedly stole an air-conditioning system from a COVID-19 isolation centre in Osogbo was arrested by the police in Osun on Tuesday.

“On July, 22 at about 1:30 p.m., a security guard attached to one of the Osun COVID-19 isolation centres – Mercy Land, noticed a person inside one of the isolation rooms removing an air conditioner.

“The security guard quickly alerted the Dada Estate Police Station in Osogbo and police officers from the station immediately moved to the scene and cordoned off the area.

“Only one Morufu Abdullah aged 27, who had removed one of the air conditioners in one of the rooms at the isolation centre was thereafter arrested,” the Commissioner of Police, Olawale Olokode, said.

Meanwhile, Mr Olokode added that three armed robbery suspects, four suspected cult members, a suspect who is alleged to be a specialist in snatching cell phones and SIM cards, were arrested during the month.

He said that another suspected burglar, who was alleged to have burgled two shops in Osogbo, was also arrested within this month.

He said that all the suspects would be charged to court after the conclusion of investigations into their matter.